GOBI representatives joined other delegates at the third session of the Preparatory Committee (PrepCom3) on the Development of an International Legally Binding Instrument under the United Nations Convention on the Law of the Sea on the Conservation and Sustainable Use of Marine Biological Diversity of Areas Beyond National Jurisdiction, which took place on 27 April – 7 May 2017 at the UN Headquarters in New York.
During the two-week session, discussions continued on the key elements of the BBNJ ‘package’: marine genetic resources, including questions on benefit-sharing; measures such as area-based management tools, including marine protected areas; environmental impact assessments; capacity building and marine technology transfer; and cross-cutting issues, such as the scope of an internationally-binding legal instrument, its relationship with other instruments, and its institutional arrangements.
PrepCom 3 concluded with delegations requesting the preparation of an updated Chair’s non-paper structuring and streamlining submissions, as well as draft substantive recommendations for consideration at the PrepCom4 meeting in July 2017, which is expected to recommend to the UN General Assembly whether to convene an intergovernmental conference to finalise negotiations of an internationally binding legal instrument for BBNJ.
Two lunchtime side events drew on expertise from GOBI partners. The first, hosted by the CBD Secretariat, was titled “From EBSAs to implementation: using ecologically and biologically significant marine areas for ecosystem-based management in ABNJ”. A presentation by GOBI partner Piers Dunstan (CSIRO) considered how EBSA data could be used in national processes, and whether this approach could be applied in ABNJ. He showcased the Australian process for identifying Matters of National Environmental Significance (MNES) – a process that has parallels with the EBSA process, and has resulted in a series of MNES being submitted to COP13 for consideration as EBSA equivalents. 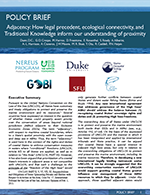 The second side event with direct engagement from GOBI was hosted by the Nippon Foundation’s Nereus Programme, focused on “Adjacency: How legal precedent, ecological connectivity, and traditional knowledge inform our understanding of proximity”. Organised and chaired by Duke University’s Daniel Dunn, and co-chaired by H.E. Jane Chigiyal of the Federated States of Macronesia, the event was accompanied by a 12-page policy brief of the same title, produced as part of the Nereus Scientific & Technical Briefs on Marine Areas Beyond National Jurisdiction (ABNJ) series. A key element of this brief focuses on marine ecological connectivity, specifically that of marine mammals, which draws on research carried out under the GOBI-IKI research programme and was presented by Duke University’s Guillermo Ortuño Crespo. Other presentations included the legal perspective on adjacency issues presented by Robin Warner (University of Wollongong), and the importance of traditional knowledge and cultural connectivity, presented by Autumn-Lynn Harrison (Smithsonian Institute).