GOBI partner MarViva Foundation, in collaboration with Misión Tiburon and Mission Blue, has recently completed a successful high-seas research expedition to the Costa Rica Thermal Dome (CRTD).
During the 2-vessel mission in early April 2017, plankton samples were collected from various depths in the water column, as well as water samples for the detection of microplastics, which are a growing area of concern in the global ocean.
In addition, migratory turtles and sharks were captured and tagged with satellite tracking devices that will enable their movements to be recorded over the coming months. Marine mammal observations were also logged.
Carried out as part of GOBI’s 5-year programme funded by the German International Climate Initiative, this work is intended to add data, information and substance in support of an effort to create an international collaborative alliance amongst Central American countries to protect and sustainably manage the Costa Rica Thermal Dome. Dr Erick Ross Salazar, a marine biologist with MarViva, explains: “We’ve been working for a couple of years with Central American countries and the first thing we need to see is a UNEP Regional Seas Programme approved for this area, which extends from Mexico down to Colombia.”
The Costa Rica Thermal Dome (CRTD) is key component of the Papagayo Upwelling System and Adjacent Areas EBSA, located in the northeastern region of the Eastern Tropical Pacific. Approximately 70% of the CRTD iso located in the high seas, with the remaining 30% straddling the Exclusive Economic Zones of the Central American countries.
The CRTD forms due to oceanographic upwelling – the rise of cold, nutrient-rich waters from the depths of the ocean, caused by the interaction of wind and ocean currents. The diameter and position of the Dome changes from year to year, and also during a distinctive annual cycle. 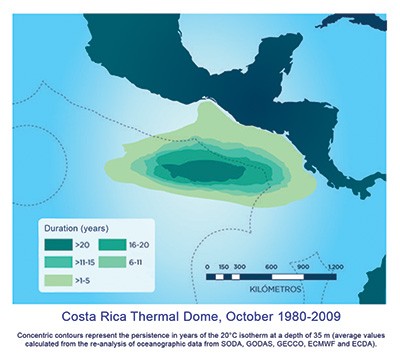 The CRTD contains one of the world’s highest concentrations of phytoplankton and primary productivity rates and is a preferred habitat for endangered species such as the blue whale and the leatherback turtle. The Dome serves as a breeding and feeding ground for these animals, a migration route for multiple cetacean species, sea turtles, large pelagic fish, marine predators and seabirds. In addition to its ecological value, the open ocean of the CRTD sustains regional fisheries and tourism.
The Dome’s temporally and spatially dynamic features present an interesting testbed for regional ocean governance.
For more comprehensive coverage of the expedition please vista the Mission Blue website. Further information on the Costa Rica Thermal Dome can be found at http://crdome.marviva.net