The Important Marine Mammal Area (IMMA) regional workshop for the South Pacific– sponsored by the GOBI-IKI project in cooperation with the Secretariat of the Pacific Regional Environment Programme (SPREP) and coordinated by the IUCN Marine Mammal Protected Areas Task Force – was successfully convened in Apia, Samoa, on 27-31 March 2017. 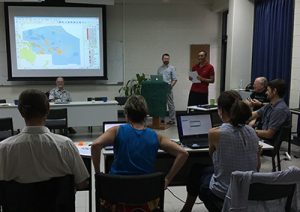 During the workshop, 23 marine mammal experts from 14 countries proposed and examined several Areas of Interest (AoI) and agreed upon a list of 29 candidate IMMAs (cIMMAs) for further consideration and review by an independent panel. The region covered by the IMMA regional workshop was vast, stretching from the Hawaiian archipelago in the northern hemisphere to the network of island states including Papua New Guinea, the Solomon Islands, New Caledonia, Niue, Tonga, Fiji, the Cook Islands and French Polynesia, among others.
The identified cIMMAs were mapped for breeding humpback whales, sperm whales, dugong and resting spinner dolphins, as well as lesser known marine mammal species in offshore waters such as pygmy and dwarf sperm whales, Risso’s dolphins, Cuvier’s beaked whales and rough-toothed dolphins.
The outcomes from the Pacific Islands IMMA regional workshop were then presented at the adjoining Whales in a Changing Ocean Conference in nearby Tonga, as part of the “Year of the Whale” celebrations in the South Pacific.
The South Pacific IMMA regional workshop is the second in a series of such events, following on the success of the first workshop which was held for the Mediterranean in October 2016. A further four IMMA regional workshops are planned over the next 4 years as part of the GOBI-IKI work programme. They will cover the NE Indian Ocean, the NW Indian Ocean, the SE Pacific and the waters of Australia-New Zealand and adjacent Oceania.
The IMMA process is intended to identify areas that are important to the 130 species of marine mammals, and in doing so will integrate existing conservation measures and help in the selection of Ecologically or Biologically Significant Areas (EBSAs) devised by the CBD, and of Key Biodiversity Areas (KBAs) devised by the IUCN.
The results from the review of all cIMMAs identified through the IMMA workshop process will be published on the Marine Mammal Protected Areas Task Force website.